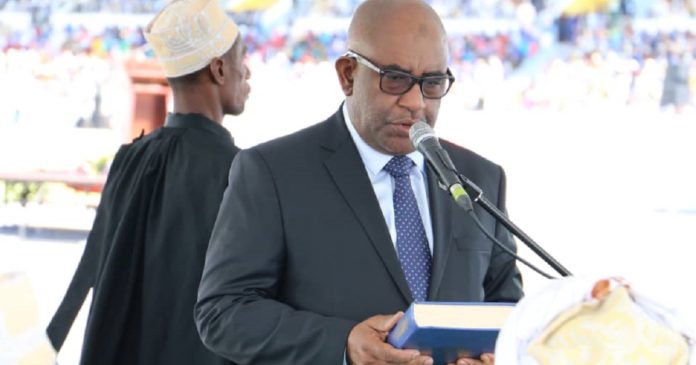 In the Comoros, the inauguration ceremony of President Assoumani, the new head of state, will take place on Wednesday, May 26. But it is under great tension that this investiture will take place because the Comorians wanted to have at the head of the country a new head of state while the former in office since 2016, was able to run for his own succession and be reelected in 2019.

President Azali Assoumani was able to stand for election thanks to a constitutional amendment in 2018. Prior to this inauguration of President Assoumani, since the beginning of the week, the army and the national police have been deployed in the capital and its surroundings.

An investiture of President Assoumani under justified tension

In the Comoros, the principle of the rotating presidency between the Islands reigns. So this year, we should have a president from the island of Anjouan given this principle. But this will not be respected because the constitution has been changed to allow President Azali Assoumani to stand for re-election in 2019. This means that this May 26, the date on which traditionally the new president is invested, this investiture of President Assoumani is badly digested. This date, considered by the common front of the opposition as that of the departure of Azali Assoumani from power, amplifies tensions. This is to say that currently there is a standoff between the common front of the opposition and the Comorian authorities.

An investiture of President Assoumani, a showdown between the opposition and the authorities

The authorities oppose any initiative of protest and mobilization of the opposition. However, opponents in exile abroad in particular are calling for rebellion. This is unacceptable according to Mohamed Daoud, the Minister of the Interior.

“I must remind you that we are in a situation of unprecedented health crisis. Gatherings are prohibited. As long as there are people who advocate violence, who want to destabilize the country, it is my duty to take all necessary measures. In addition, we must understand that we have a country with a Constitution : everyone is free to express themselves freely but in accordance with the established rules « , he said.

The authorities have deployed an important device to secure the population, says the minister.

« I think it’s normal that we strengthen the security system. I want to say that we will not tolerate any overflow. It is normal that we take preventive measures. Now they cannot create a climate of fear so I call for calm and restraint. I also want to reassure the population and tell them that we are in a normal situation. Life goes on ”, he adds.

It should be noted that the inauguration of President Assoumani will be a modest ceremony, barrier gestures oblige.