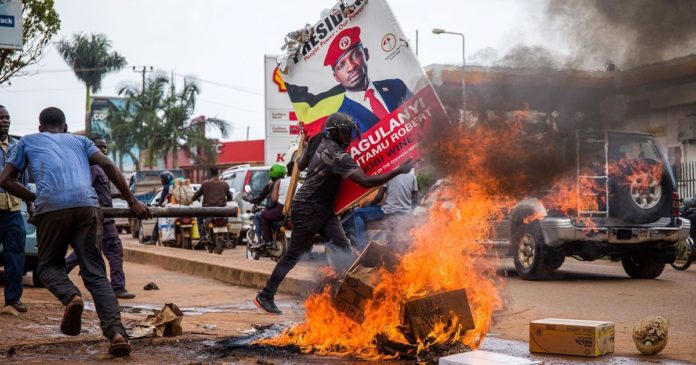 The presidential election in Uganda scheduled for 14 January is approaching. Outgoing President Yoweri Museveni is running for a sixth term against Bobi Wine, the main opposition candidate. In recent months the process has been marred by acts of violence. A post-election crisis is looming. What scares the traders.

Faced with this situation, marked by demonstrations and violence, traders are especially concerned in the Kikoni district of Kampala, many are preparing to close for several days.

The presidential election in Uganda is a period of high-risk. Which makes traders afraid. This is the case of Sarah who is concerned about this very sensitive period. For her, there is no question of opening election week. « I would close on Sunday. I need money, but the situation does not allow us to stay open. We’re very scared. I’m scared because I don’t know what’s going to happen, » she said.

More specifically, shopkeepers in the Kikoni district, close to Makerere University, fear further waves of violence around the presidential election in Uganda. The official death toll of 54 people who died in the November violence has been remembered by the collective. Even at the house, Jemimah sells shoes that does not intend to take any risks.

« We cannot remain open because we expect the situation to be tense. If we go out and open the store, things could go wrong. So we have to close and stay safe. »

Despite this fear that reigns everywhere, some intend to carry out their activities as it should be while being awake. This means that there are brave people who will open their facilities in the election period.

According to RFI’s colleagues, a little further down the street, Eddie hopes to be able to stay open during the elections. The same source informs that he will only close his clothing store if riots break out. Because the economic consequences of a closure would be far too difficult to bear.

« If you don’t make money for just one day, it’s a loss, because rents are expensive and we have to pay our taxes. So even one day, it’s already too much. We don’t want to close, » Eddie said.

It should be remembered that earlier this week, Ugandan police spokesman Fred Enanga announced that he was increasing police patrols in the city in the run-up to the elections.